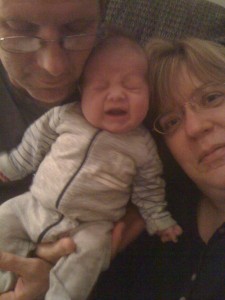 Zach spent his first night at our house on our 27th anniversary.  He doesn’t look happy in this pic but that was just one moment in time.  Check out his sleeper.  That’s the sleeper Corey wore home from the hospital when he was born almost twenty-five years ago.  Danielle sent two sleepers and I asked Mark which one we should put on him after his bath and Mark said “Corey’s”, so Corey’s sleeper it was.

We had a great night other than he likes to be held instead of sleeping in his bed.  That’s fine – I told Danielle we need to stop saying he’s spoiled (even though he totally is) and from now on we say he’s just very loved.  Nothing wrong with that.

He had mirror time in the bathroom with Grandpa Mark……….. 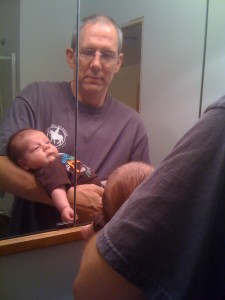 He had a bath in the big boy bathtub………… 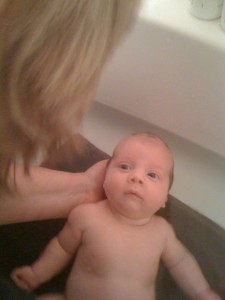 He had cuddle time with Grandma Teri………… 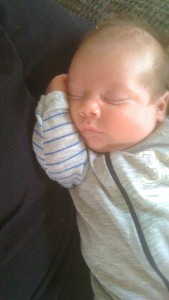 Great Grandma Carol came over in the morning to visit and brought him a teddy bear as big as he is…………. 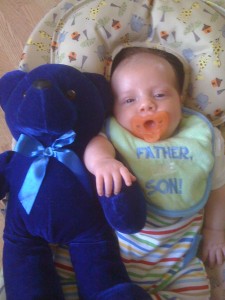 Great Grandma Carol had the teddy bear watch over Zach as he slept – sweetness……….. 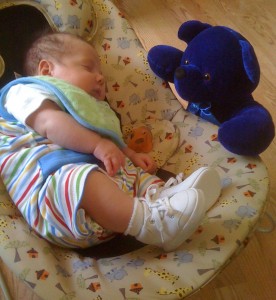 These are pics of my dad at work – he’ll be seventy-seven in July and yes, he still works part-time on a farm.  The first pic is him in the field………… 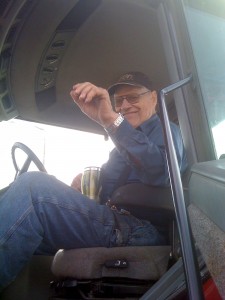 …………..and this pic is him on the farm, compacting the pile in the bunker – scares the heck out of me but he loves it.  I went up with him one time several years ago and he took great joy in scaring the crap out of me.  I was screaming – he was laughing. 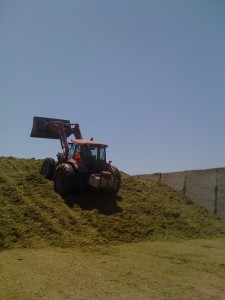 ME!!!!  Yes, Happy Birthday to me – even though my birthday was December 22.  My parents had Mark and I over for dinner.  Corey and Danielle came too.  I thought we were there just for dinner and dessert but then my parents disappeared and came back out with this beautiful pumpkin bread.  Dad made the pumpkin bread (topped with pecans – yummy).  He then cut it and arranged it beautifully and Mom topped it with the candle (zero years – I’ll take it). 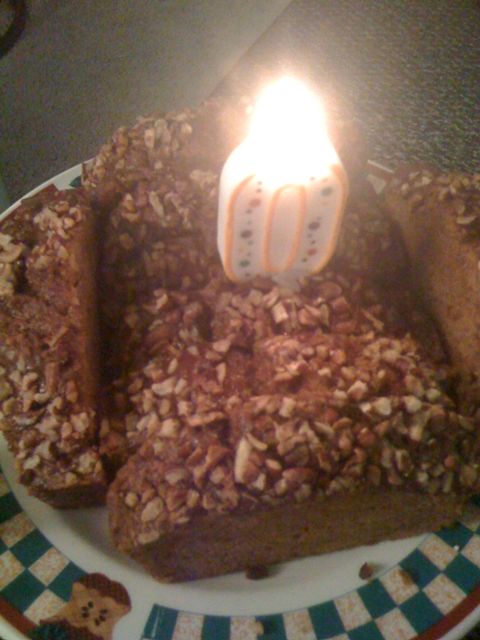 Why a birthday party on February 27 when my birthday was December 22?  My parents got me Amazon gift cards for my birthday and Christmas and they got misplaced so I didn’t get them for my birthday and Christmas.  I told Mom “no big deal” – I don’t need gifts anyway.  She found them and my parents did this little surprise party to give me my gift cards.  Awwwww.  And then here’s the double awwwwww – Sammy – not great pics because it was dark and I was using my iPhone – but this is me holding my cake and Sammy on the floor wishing he could have a piece.  He’s adorable. 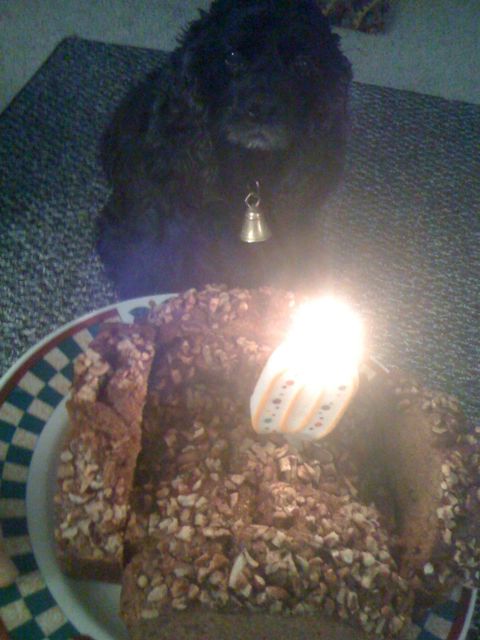 It was a great surprise – I couldn’t figure out whose birthday we were celebrating when everybody starting singing “Happy Birthday”.  Thanks Mom and Dad!!!!

People were cold – we can’t have that (kidding – they were warm but it adds to the mystery).  Here’s what I made for Mom.  The yarn is Yarn Bee Soft Delight Extremes – the color is EX brown.  This is NICE yarn.  It is double-stranded with Regia loden sock yarn.  Maybe you can’t tell from the picture, but it is a keyhole scarf and a pair of fingerless gloves – very luxurious. 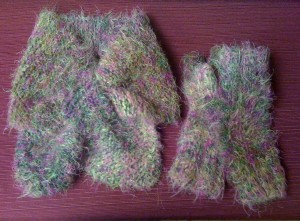 This hat and gaiter set was made for Dad.  The hat is double thick and reversible.  The camo yarn is Red Heart (ickkkkkkkkk) and the other yarn is I Love This Yarn (and I do) – the color is coffee. 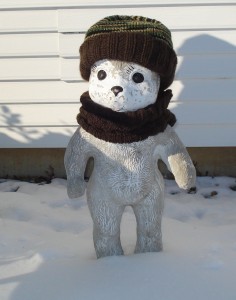 …that wasn’t Dad…this is Dad…he likes getting his picture taken. 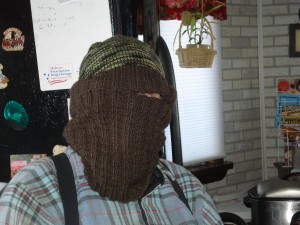 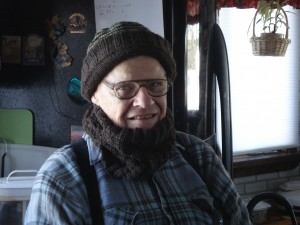 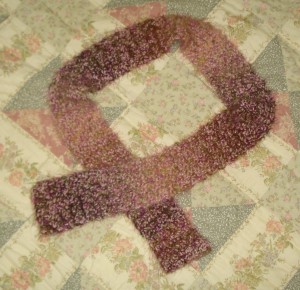 Mom got sick on Christmas Day.  She’s still trying to feel better – bronchitis kicked her butt.  I made her this pot of homemade chicken and noodles with dumplings on top.  Yummers.  We all enjoyed it (Roger………if I knew you were going to be there, I would have made some bigger chunks!!!).  Mom was too sick to enjoy it but Dad, Mark, Roger and myself LOVED it. 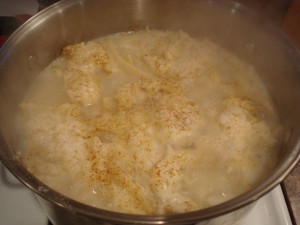 This is a YouTube video Keith posted when he came home for Grandpa’s birthday (Happy 76 Dad!!  How many times do I have to tell you to stop getting older???).  This was taken from the swing in our back yard – it truly is beautiful. 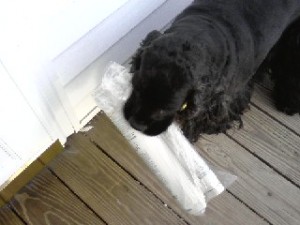 This is Sammy, my parents’ cocker spaniel, bringing in the paper in the morning for my parents.  What a good dog.  He’s the best dog and loves everybody. 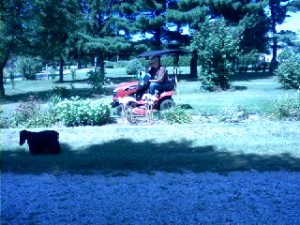 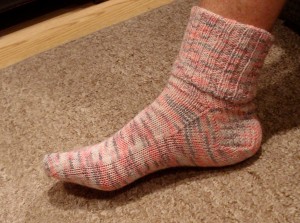 Happy Mother’s Day to Mom!  I made her these socks and we bought her a wireless mouse and keyboard.  She was pretty happy.  I was not fond of this sock yarn – the color looked a little dull to me but Mom loves them and that’s all that matters.  Mom – you are loved. 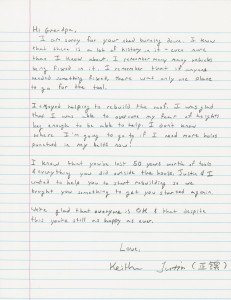 That is a copy of a letter written to Grandpa from Keith and Justin (click to enlarge).  Keith and Justin bought Grandpa a new screwdriver set and a pair of pliers.  The reference to the holes being punched is because Grandpa had a leather punch and he used to punch holes in Keith and Corey’s new belts to make them just the right size for Keith and Corey ever since they were old enough to wear belts.  If they grew and needed more holes, they’d go see Grandpa.  Maybe we should get Grandpa a new leather punch too.

Below is a picture of Keith’s first bicycle.  It was an antique Schwinn.  Keith didn’t have room to save it when he moved so Grandpa took it.  Grandpa was going to just use the tires to build a cart or a wagon or something but then it was so nice, he was going to put it in the landscaping in his front yard with a sign that said “Keith’s bike”.  Somehow, it managed to stay beautifully upright through the fire, right where Grandpa had stored it.  I think it’s symbolic of life going on. 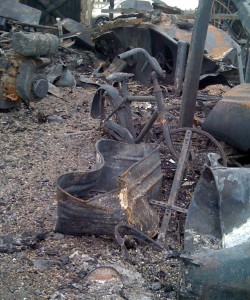 The last picture is Dad’s toolbox.  Dad has been a mechanic forever.  He used to work on buses, tractors, cars, trucks, mowers – everything!  It was a fun childhood.  We used to get to get in whatever he was working on and “press the brakes” or “start the car” – just fun times if you were a kid.  There was a pop machine in his shop with the old glass bottles – we would get to count the change or fill the machine.  If I were really lucky, Dad would ask me to make a new sign and I’d get to use the big markers in his drawer and get creative.  The history in that shed is HUGE.  It’s sad to look at it all but there’s always that upside – nobody was hurt. 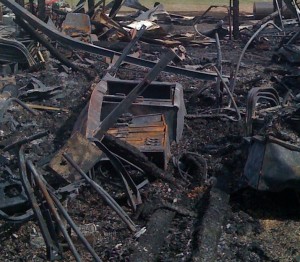