Who better than I?  Grandma always used to say that.  I don’t think Grandma really did all that much for herself but she always said it to me – so yah, let’s all do something for ourselves.  We’re just as important as all the people we take care of.  This I made for myself after a brutal two-hour shoveling session during the first big snow storm of the year.  I LOVE it.  I don’t look great in a hat but it is very effective – very warm – very soft.  The pattern is http://throughtheloops.typepad.com/Thorpe.pdf and the yarn is Deborah Norville Serenity Chunky – the color is Golden. 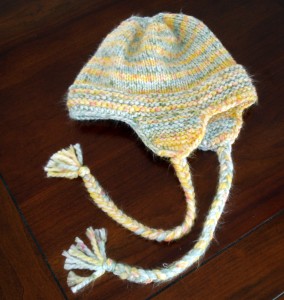 Did I mention that I LOVE THIS HAT?