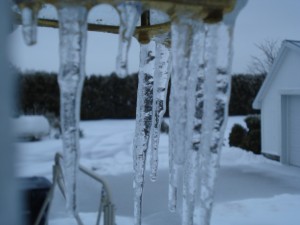 This link http://tinyurl.com/98a8uv will take you to the pictures from the ice storm we had while Mark was in the hospital.  The pictures have captions and I think an ice storm is pretty much self-explanatory.  The wind chill at one point was -39.  Today’s temperature is -4 with a wind chill of -12.

The first day of the storm we lost power.  Mark was still in the hospital but his hospital did not lose power – it is a little over an hour away from home.  The power went out at about 3:00 a.m. and I didn’t wake up until 4:00 a.m. so it was already starting to get cold in the house.  It was 62 degrees in the house so I lit a bunch of our bigger candles and votives.  I also took four dinner plates, covered them with foil and filled them each with tea lights.  It took me fifteen minutes to light them all but I remember when the kids were little and they were snowed in with my parents, my parents had lit candles to keep a little heat in the house and it really does help.  It was 62 in the house when I lit the candles and it was still 62 in the house when the power was restored several hours later.